About Birdsville & Other Attractions

Birdsville is a small outback town situated on the banks of the Diamantina River between the sands of the Simpson Desert and the gibbers of the Sturt Stony Desert. The area is steeped in history, from Aboriginal meeting places to European settlement in the late 1870s and beyond. 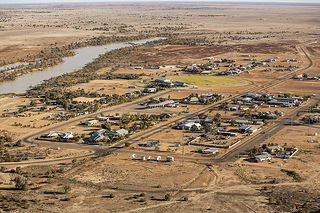 This normally quiet town of roughly 100 people swells to around 10,000 during the Big Red Bash!

The town has many thriving businesses and provides modern facilities for all travellers. Comfortable accommodation and general supplies are available in the town.Facilities include:

Birdsville is located in the Temperate Zone with a generally arid climate. Rainfall average totals 160mm each year occurring mostly in summer with September being the driest month of the year. Daytime temperatures in the region reach an extreme mid 40C in the summer (November - February) down to typical desert nights of 4C in the winter. Milder daytime temperatures reach (15-35C) during the winter months.

The Simpson Desert to the west of Birdsville is a large area of dry, red sandy plain and dunes in Northern Territory, South Australia and Queensland in central Australia. It is the fourth largest Australian desert, with an area of 176,500 km² and is the world's largest sand dune desert.

The desert is underlain by the Great Artesian Basin, one of the largest inland drainage areas in the world. Water from the basin rises to the surface at numerous natural springs, including Dalhousie Springs, and at bores drilled along stock routes, or during petroleum exploration. As a result of exploitation by such bores, the flow of water to springs has been steadily decreasing in recent years. It is also part of the Lake Eyre basin. 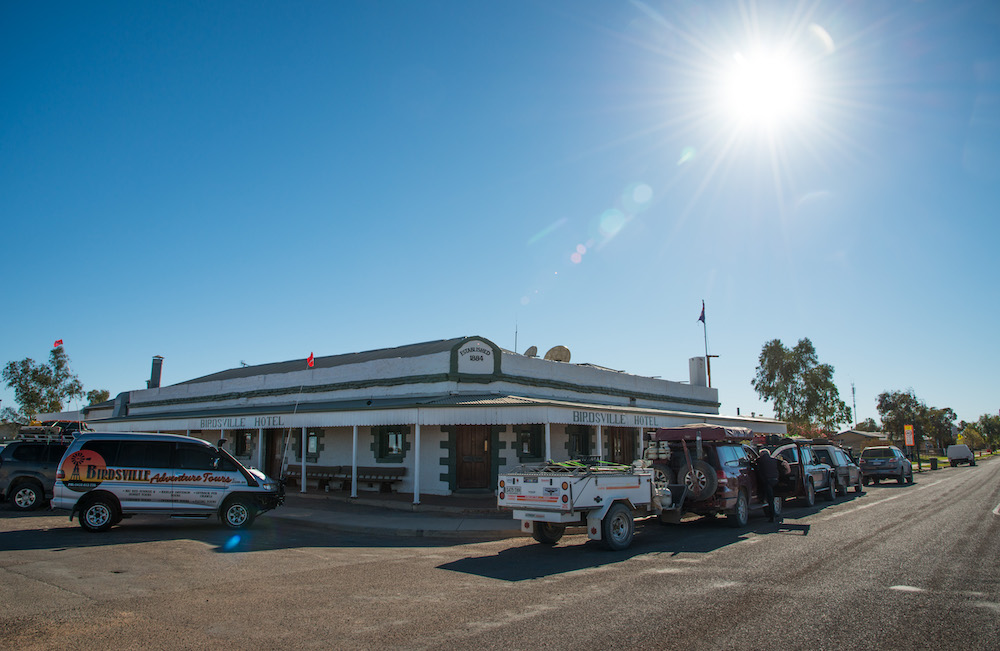 The Simpson Desert is an erg (an area of actively shifting dunes, sometimes called a Sand Sea) which contains the world's longest parallel sand dunes. These north-south oriented dunes are static, held in position by vegetation. They vary in height from 3 metres in the west to around 30 metres on the eastern side. The largest and most famous dune, Nappanerica, or more popularly Big Red (named by Simpson Desert traveller Dennis Bartell), is 40 metres in height.

Birdsville during the Bash

As the local population swells during and around the Big Red Bash, you can expect some crowds, queues and busy roads. There are a few things you can do to help:

Before you refuel in Birdsville, please unhitch your caravan and set up camp. Fewer caravans in the line means more space for other vehicles!

When you’re done filling up, head inside and pay for your fuel, then move your vehicle before stocking up with groceries, souvenirs or other supplies.

You can fill up your drinking water at the taps on the Common or at Bronco Banding Yards on Big Red Road, which will be signposted.

Camp only in designated areas

Please help us respect Birdsville locals’ wishes by camping in designated areas such as the Birdsville Caravan Park, or the free camping area at the Common.

There is no other free or roadside camping around Birdsville or on the way to the Bash - it’s all private property. Trespassers may damage station roads, disrupt dams or disturb the cattle.

Public showers are available opposite the Birdsville Sports Centre. The showers operate during daylight hours during the week of the Big Red Bash. The shower block is operated by the PCYC and a donation of $5 per person applies.